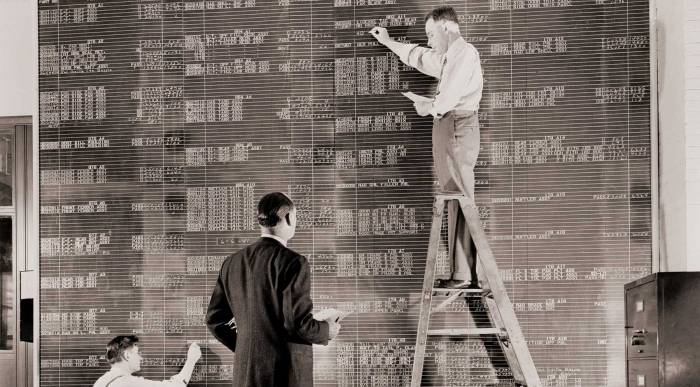 A primitive version of Microsoft Excel.

If I had one piece of advice for myself when I was in college it would be this, “Hey, you, guy with the floppy hair! You should go learn Excel now rather than later.”

When I was in school, I took a computer science class. In class I was introduced to the basics of how to use a keyboard, what a right-click meant, and fundamentals of Microsoft Office. It was one of those necessary classes you have to take to graduate, but it nearly bored me to tears. I loved my teacher. But I hated the topic.

It was in this class that I was introduced to super basic Microsoft Excel formulas (such as how to multiply two cells by each other). I think this is something I was aware of previously, but I never connected the dots to how it could actually be useful to me. Up to that point, I thought a spreadsheet was basically a table you could manually insert data into and out from. Like a fancy, digital piece of paper.

Little did I know that learning Microsoft Excel would ultimately transform my life.

When I was scooped out of the oilfields by my current employer, I didn’t know Microsoft Excel beyond those few basics I learned in my computer science class. But what was interesting is that I thought I knew Excel. I thought I was close to being an expert. So, when I put on my resume that I was proficient in Microsoft Excel, I thought I was being truthful. But I wasn’t. Not by a long shot.

My Microsoft Excel journey started a few months into my job. I found a few shortcuts and ways to save myself time. Being prone to laziness, I loved this! It was like finding the Holy Grail! Every time I was able to take a mundane and boring part of my job and solve it with a spreadsheet, I was elated! I confess, much of this was due my passionate hatred of mundane, boring work and my desire to see it vanquished.

I ended up teaching myself Microsoft Excel via countless Google searches. It was all JIT (just-in-time). I only learned new things when I could use them immediately. I eventually got pretty good at getting a hunch about when I could use Excel to make my life easier. It was here that I discovered thus fundamental truth:

“If you think it can be done quicker in Excel, you’re right.”

This has literally always been true. I’ve never had a single moment where I had a hunch where I thought I could do something better in Excel that it turned out I could not. It can always be done. There’s been times where I didn’t figure it out immediately, but a few months later I came back to the problem and solved it another way.

It’s all about creativity, pairing up concepts, and breaking down your logic into sequences. If it’s logical and there’s data, it can likely be solved in Excel.

Learning Microsoft Excel has been fundamentally transformational for my life. It’s resulted directly in several promotions, increased responsibility, and pay raises. It’s resulted in me, as a twenty-something year old kid, being seen as a guru at something, which in and of itself is highly valuable.

So, I wanted to take a moment to share with you what you’re missing out on by not knowing Excel.

1. Your lack of Excel knowledge is hurting your productivity.

I’m frequently amazed to watch the inefficiencies of the modern office. It’s astounding, really. While the Toyota Production System and Lean Manufacturing have driven out many inefficiencies in the manufacturing and operations world, many of our office jobs are wildly unproductive.

Part of the reason for this is because office work is difficult to see. I can watch someone inefficiently screw together a pipe. But in the digital world, an efficient digital worker and an inefficient one look exactly the same: You just see a person sitting at their computer clicking and pounding their keyboard. In other words, all of the inefficiency is hidden.

What I found when I started learning Excel is just how much inefficiency I had in my work. It was astounding. I was wasting hours upon hours doing horrible, horrific and mundane work. Okay, it wasn’t that bad. But it was close.

When you master Microsoft Excel, you will find dozens of ways to make yourself more productive. You will add hours back to your workweek. And this extra time brings me to point #2.

2. Your lack of Excel knowledge keeps you from contributing high-value work.

Because of your inefficiency, you are spending many hours each week doing things that could be done quickly and easily with Microsoft Excel. This sort of work is generally very low value (which is why it can be automated). These rule-based, constrained elements of our day-to-day jobs should be automated and eliminated to whatever extent you can.

Why? Is it so we can convince our boss to let us move to Belize so we can live the 4-Hour Workweek?

Every singly hour you free up with your efficiency should be re-invested back into producing kickass, high-value work. These high-value projects are the important but not urgent high-value projects that you’ve been kicking around for months but never had time to get to. By taking all that freed up time and re-investing it back into your work performance, you will experience the power of compounding in your professional life.

3. You have to accept reports without fully understanding them.

Excel and its cousins in the software world literally drive business. A well-crafted spreadsheet can have massive and long-term impacts on your business. Business leaders are increasingly using data to drive decisions. Most of that data comes to them in the form of Excel files. And if it’s not an Excel files, then it’s a PDF that was once an Excel file.

By not understanding Microsoft Excel, you simply have to accept the verdicts of these reports. You just have to sit back and accept the numbers. Because, after all, numbers can’t lie, right?

Numbers lie all the time. Statistics lie all the time. Lying with statistics and numbers is a tale as old as times. Don’t misunderstand what I’m saying: numbers and reports are valuable. But if you don’t fully recognize the agenda of people behind them, you’re going to get duped.

Everyone has an agenda. That’s actually a good thing. People are trying to accomplish their personal and professional goals and objectives. That’s also a good thing. But you need to be able to critically assess and dissect when these agendas make their way to your Outlook inbox in the form of a shiny Microsoft Excel report.

If you don’t understand the basics of how those numbers were created, what was left-out, what was included, and what the rest of the story is, you’re going to put yourself in a vulnerable position where you may make poor business decisions based on faulty data. By having a firm grasp of Microsoft Excel (and some statistics), you will be able to critically think about all those whirring and dinging reports showing up in your inbox each day.

4. You lack the data to explore your hunches.

“Diff, you’ve got to listen to that Spidey Sense,” my boss once told me. “If it starts tingling, you’ve got to go in and ask the questions and figure out why.”

It was great advice.

A hunch is a beautiful thing.

At times we get ideas and suspicions about business. By having the ability to test these hunches against real data, you will be able to either dismiss these or explore them more deeply and back them up. I’ve found many times that when I keep pulling the thread, I learn something fascinating along the way.

5. You are unable to myth-bust long-held assumptions.

I remember one day an employee came to me venting that another employee was not pulling their fair share of the work. A few minutes later, I was able to show the employee from actual system data that the employee they believed was slacking off was actually producing more than most of the other team members. The shocked look on this person’s face said it all—no one would have guessed it from the outset. This is just one example of myth-busting you can do by having the ability to slice and dice data in Excel.

It’s fascinating just how many beliefs, completely unsubstantiated by data, exist within any culture. Excel gives you the tool to test those beliefs and either confirm or dispel the myths.

6. You lack the information to make good decisions.

There are two resources that have been instrumental in my own learning and understanding of Excel that I wanted to share with you via the links below.

Excel Jet explains Excel formulas better than any other website on the planet. It helps you out with all of those “hard to reach” spots in Microsoft Excel that you don’t use everyday.

This guy’s YouTube channels is extremely in-depth and he’s the one who introduced me to the term “dancing ants.” He’s almost got too much content, but his videos are clear and very well done.