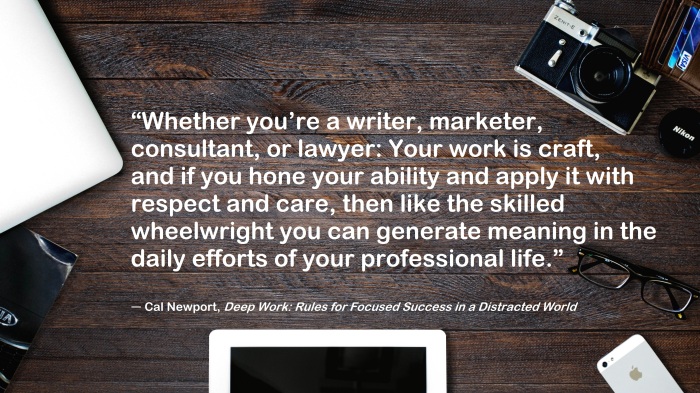 Deep Work by Cal Newport, a popular blogger and professor, is one of those rare non-fiction books that communicates a deep truth (pun intended) while being so clearly self-evident you wish you’d taken the time to write it. Simple yet profound, Newport strikes at the core of what it means to be a worker in the 21st century and how our age of connectivity has negatively affected our ability to produce value and meaning in both our personal and professional lives.

In today’s age, we are profoundly over-connected, over-available, and over-extended. People often complain of being “swamped” at work (and stressed to the breaking point). While it’s hard to measure, anecdotally it does appear that we are currently busier than ever. In this environment, a huge vacuum and industry has been created where people teach you to cram more activity into the same amount of time.

One of the premier thinkers in increasing productivity is David Allen, a personal hero of mine, has his Getting Things Done methodology that has influenced many of the brightest minds of our age. Against this backdrop of hyper-busyness, Newport challenges many of these assumptions, arguing that we should be focusing on value-generating work, as not all work is equally weighted. Simply getting things done is not enough. Instead, we need to focus on getting valuable things done. This may come at the expense of many other trivial and value-poor activities. This subtle critique of Allen is a brilliant point by Newport, and one that I think David Allen would readily agree with.

In focusing on value-creation, Newport argues that we need to be focusing on “deep work.” Newport defines deep work as follows:

“Deep Work: Professional activities performed in a state of distraction-free concentration that push your cognitive capabilities to their limit. These efforts create new value, improve your skill, and are hard to replicate.”

The opposite of deep work is shallow work. Newport argues that for most knowledge workers, the vast majority of deep work and true value creation has been replaced by cheap, shallow work that neither adds significant value nor is particular satisfying. This shallow work has spilled out of our inboxes and into our home lives as well. Instead of focusing on building meaningful friendships, for example, we endlessly scroll our Facebook to “keep in touch” with friends we never see. Our entertainment choices, such as Buzzfeed articles, also contribute to a frenetic culture that has focused on shallow in exchange for the deep and meaningful.

Because deep work is rare, it is also extremely valuable. As the world focuses more and more on instant and immediate shallow work, you can harvest the benefits of deep work by declining to participate in the frenzy of “the shallows.” While some shallow work is inevitable and necessary, creating time for high-value work is a key to building your professional success. For example, if you focus for two hours a day on a high-value project that you are able to complete in a month, you will make a much higher level of contribution than if you simply responded to every single ding and buzz of your phone.

Since reading Deep Work, I’ve noticed just how difficult it is to resist the temptation of my phone. This is one of those self-evident truths I’ve known for some time. But becoming fully aware of just how addicted I am to this device is unnerving. Whether it’s a quick glance at my email, a browse over to DrudgeReport, or my 100th glance at my Facebook newsfeed for the day, our phones are these massive distraction devices, perfectly geared and engineered to keep us from becoming bored.

In terms of social media, Newport does not come outright and call for us to stop. However, he points out that if we were to look at our most important goals (personal and professional), it’s unlikely that social media is truly one of the two or three key activities we should be focusing on to achieve them. Even for our relationships, if we were to objectively rank the importance of social media in maintaining our key friendships (when compared to other objective activities), it’s likely there are a half a dozen other activities we should be doing rather than focusing on our endlessly-scrolling social media profiles. Rather than simply accepting social media because it may provide a benefit (such as staying in touch with distant friends), Newport argues that we should carefully consider the pros and cons, as there are very real cons associated with social media that often outweigh the meager benefits. Deep Work has not yet made me quit social media, but I’m closer than I’ve ever been.

All of these social media sites and digital tools are designed to keep us from the biggest fear of all: boredom. We just simply aren’t bored anymore. When we have a moment of boredom, we whip out our phone. Presto! Things aren’t boring anymore.

Numerous studies have shown that this decrease in boredom is having severe negative effects on our cognitive abilities. Humans were meant to be bored. Did you ever stop to think that, as recently as 80 years ago, the primary source of entertainment for most families was watching logs burn on a fire in the evening? We’ve take massive changes to how we interact with the world, and these changes are negatively affecting our ability to work and perform high value cognitive tasks.

As a chronic pacer who struggles to focus on anything for more than fifteen minutes, many of Newport’s prescriptions to increase boredom and my ability to focus strikes an unsettling nerve for me. I still want desperately to believe that frantically running around the office, waving my arms, and pointing like a madman are somehow productive. But his book reminds me this is not true. Deep Work is a counter-cultural book that reminds you that your highest and noblest contributions will likely be made with hours of intense and deliberate work, performed in quiet settings away from noise and distractions.

It is thus that the modern office stands in stark contrast. With open-offices becoming so common that they are now the norm and not the exception, it’s never been harder to focus. There’s a reason that most people who work remotely believe they are more productive at home (which is a place that’s not engineered for professional productivity for most people). Despite the distractions of home, the distractions of the office are significantly greater for most of us. Quiet, thoughtful, deliberative work is extremely difficult to accomplish in our modern offices, because we’ve exchanged a false belief that busyness is an acceptable substitute for value. It’s become increasingly apparent that most offices are not designed for the type of work this century demands.

I’m not trying to argue that we should all move out of our offices and onto a mountaintop somewhere where we can do deep work in isolation. Nor am I trying to argue that we should all work for twenty hours a week. Less is not more necessarily. Less busywork and more high value work is more. By recognizing the difference between deep and shallow work, you can create space for the former and limit the latter, using many of the tools and strategies outlined in this incisive and thought-provoking book. While I won’t go into all of these in depth (you really should buy the book for that), nearly every knowledge worker in today’s economy can make strategic steps to focus on value producing work.

Deep Work is a book worthy of your time and consideration. Being penned by an academic, it is much more rigorous than many of the pop self-help books out there, but it’s written in a clear and accessible style for the masses. I am going to be employing several of the strategies Newport recommends, and I will be sharing my results in the blog in future posts.

3 thoughts on “Deep Work in a Shallow World: A Book Review”